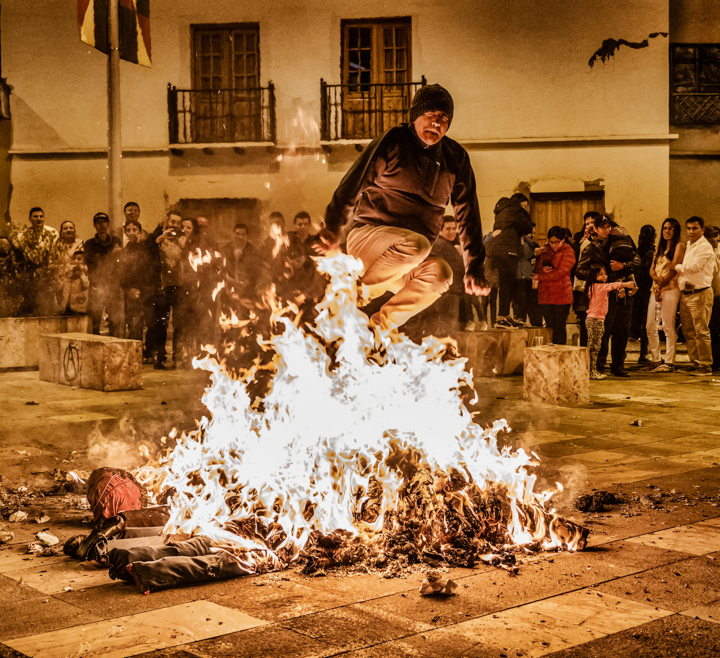 Saying goodbye to the old year with fire destroying the negative aspects of the prior year is a traditional way of celebrating New Year’s Eve in Ecuador. This New Year’s Eve appeared to be “the year of the jumpers.” There must have been a Zhumir (a locally made strong alcohol drink) or Pilsner contest, as jumpers were daring each other on how many times they could jump over the hot fire at the El Vado neighborhood plaza (above). 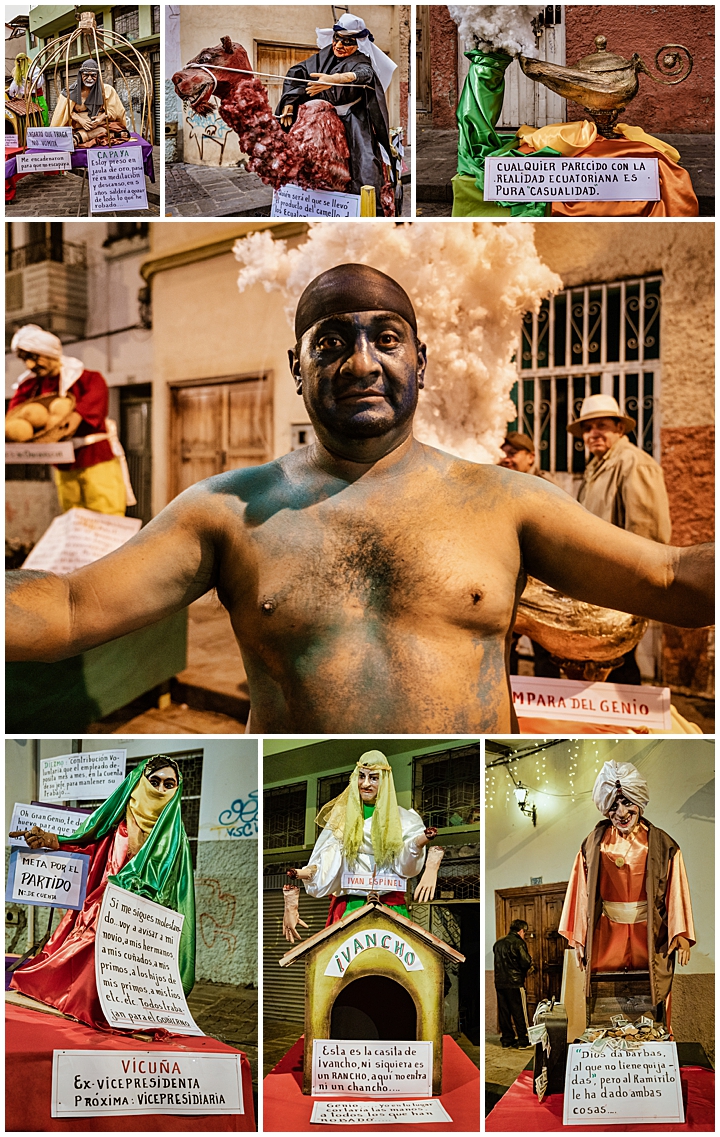 There were 23 entries for the annual Amistad Club de Cuenca contest this year. The El Vado neighborhood located on calle Juan Montalvo in el Centro won the 3rd place prize of $1,500 for their theme: “El genio en el país de los sapos” (“The genius in the country of toads“). It was a series of displays linked to the theme of Arabian nights, including President Lenin Moreno coming out of a genie’s lamp (upper right), tales of corruption revolving around Odebrecht (upper left), Alvarado and the magic carpet, and a doll showing ex-VP Vicuna with a sign “put money into the game.” (lower left — She is currently on trial for forcing an underling to pay Vicuna $2000/mo to keep her job.)

This year, the crowds were thinner than in prior years. We were able to comfortably walk down this street and had time to stop at each display to read (and translate) the messages. For the first time, the Ministry of Tourism printed a map showing where all the 23 displays were located, so we could plan our day’s walking around the city. 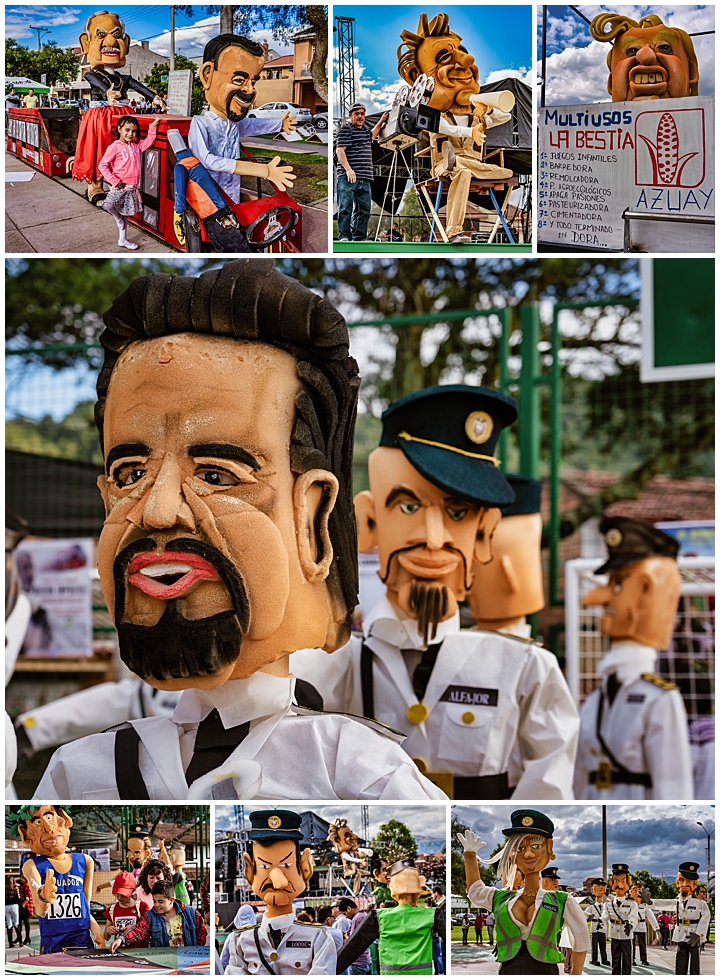 The El Vergel neighborhood won the $3,000 first prize, as they did the previous year, shown above.  Their theme was “La Ortiga Film Festival.” The centerpiece was President Lenin Moreno, megaphone in hand,  shown directing the film of politics and corruption (upper center). There were scenes making fun of the Tranvia, with Paul Granda and Mayor Marcelo Cabrero dressed in a chola Cuencana dress (upper left), Correa as the incredible hulk, Jorge Glas in a luxurious prison cell, big cows and cuy alluded to the Azuay Prefectura for multiple road works. 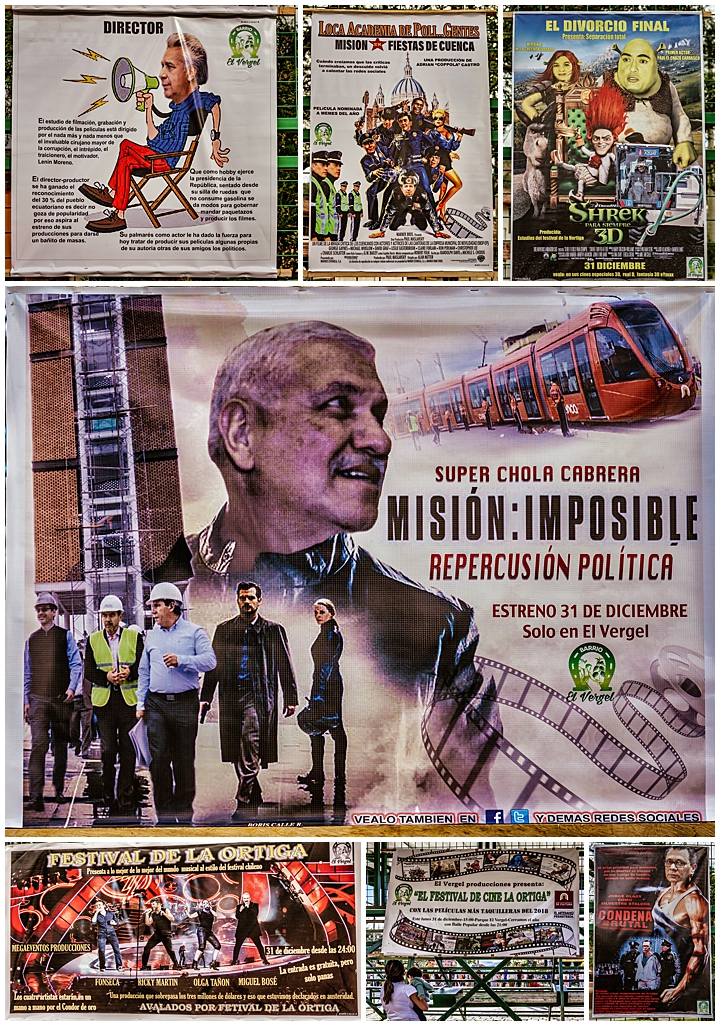 A number of artistic posters were created, which supported the movie theme at the El Vergel display. 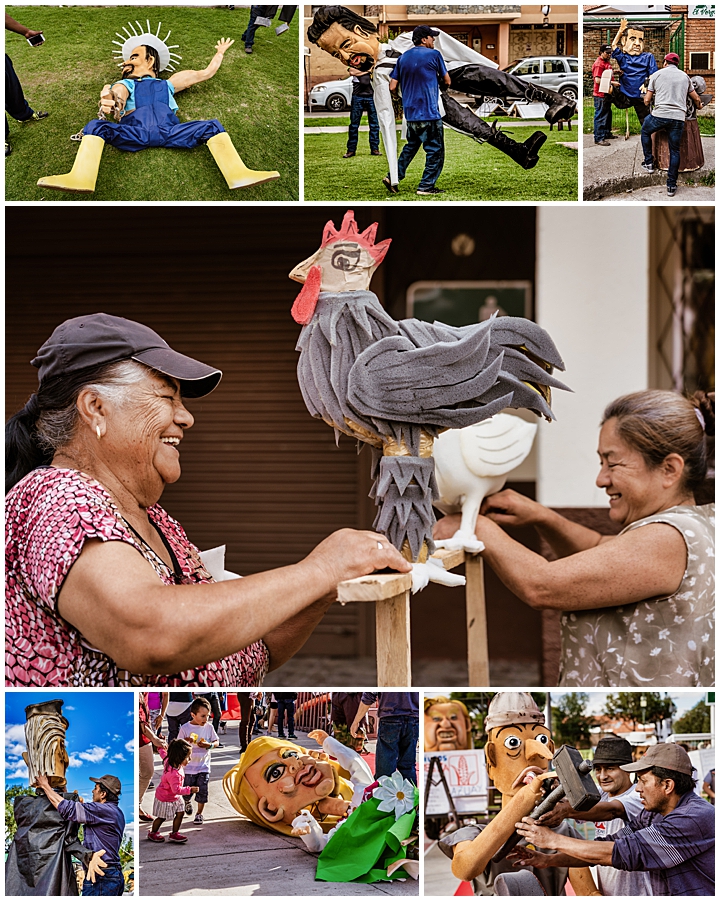 This year the El Vergel arrangement was moved to a park several blocks behind the old El Vergel church, which provided more space.  In prior years, the crowds blocked traffic along Avenida 12th de Abril. The entire neighborhood participated, as people were painting and setting up their displays all afternoon. 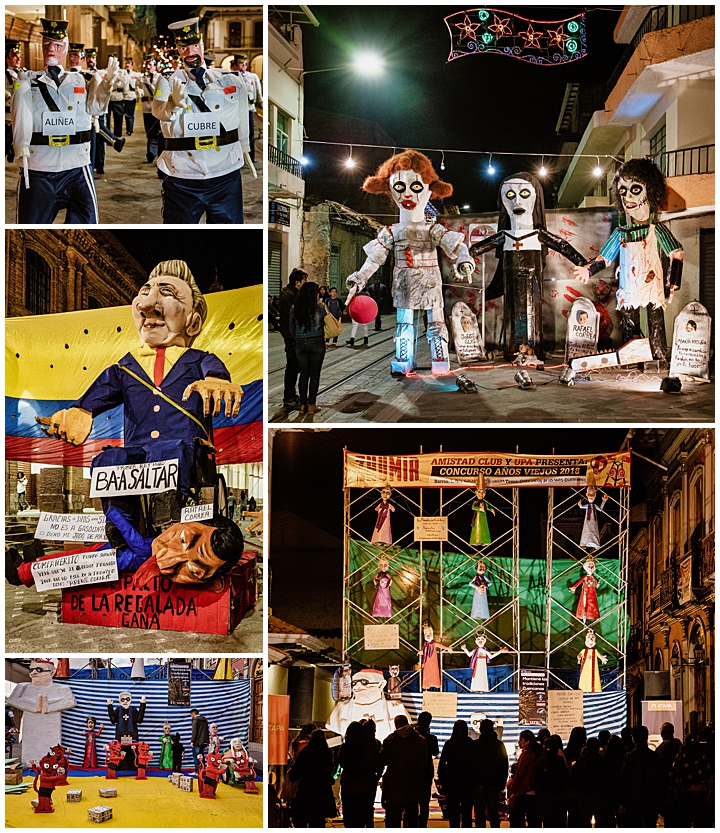 The San Francisco neighborhood, located on Padre Aguirre, won the fifth place prize of $1,000 with their theme: “Mi projecto marcha bien“(“My project is going well“)  and consisted of a score of uniformed traffic cops marching with legs in different positions (upper left).

Other displays included the theme “El pacto de la regalada gana” (as in “The kids do whatever they want“), showing President Lenin Moreno as the Magi with his chair as Basaltar with his foot on a monigote of Correa (middle left). Another display located on Gran Colombia made fun of the Catholic priests (lower right and lower left), and many others around the city poked fun at politicians from Venezuela, Tranvia, Ecuadorean politicians, soccer players, beauty queens, traffic agents of EMOV. 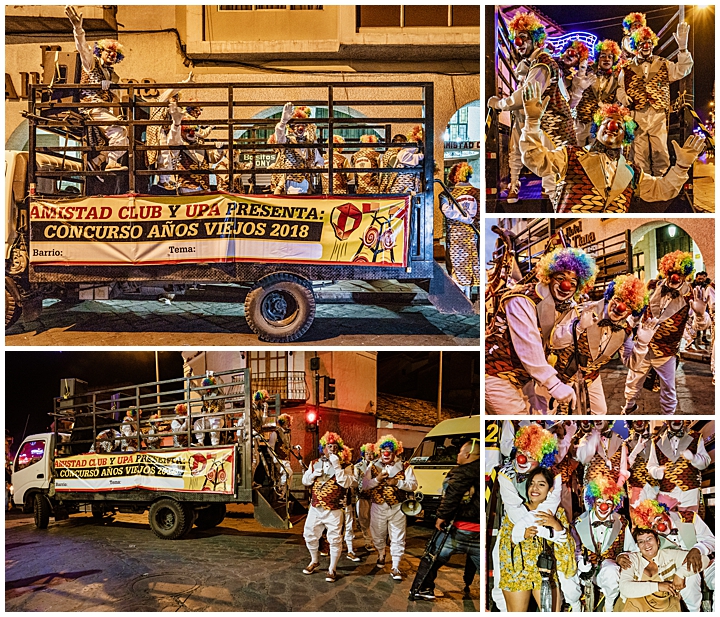 Then came the clowns… first you see two police motorcycles racing with sirens and lights blazing, then stopping to block traffic.  Next you hear the sirens of the fire truck escorting a flatbed truck. Dozens of clowns pile out from the back of the truck, pose with the crowds, and walk around each display.

These clowns  are from Amistad Club de Cuenca (The friendship club), and along with delegates of the Municipality and the Union of Journalists of Azuay, are the official judges for this contest. There were six prizes awarded taking into account the message, creativity, artistic presentation, lighting, and community participation. 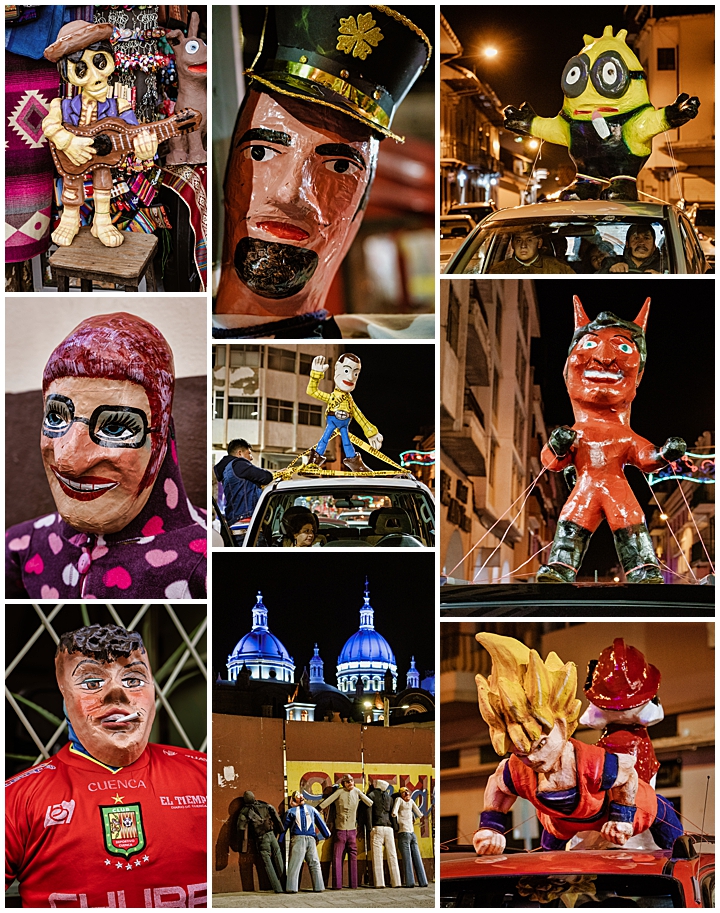 Every year, we see manigotes (paper mâché effigies) paraded on top of cars and displayed in front of businesses. 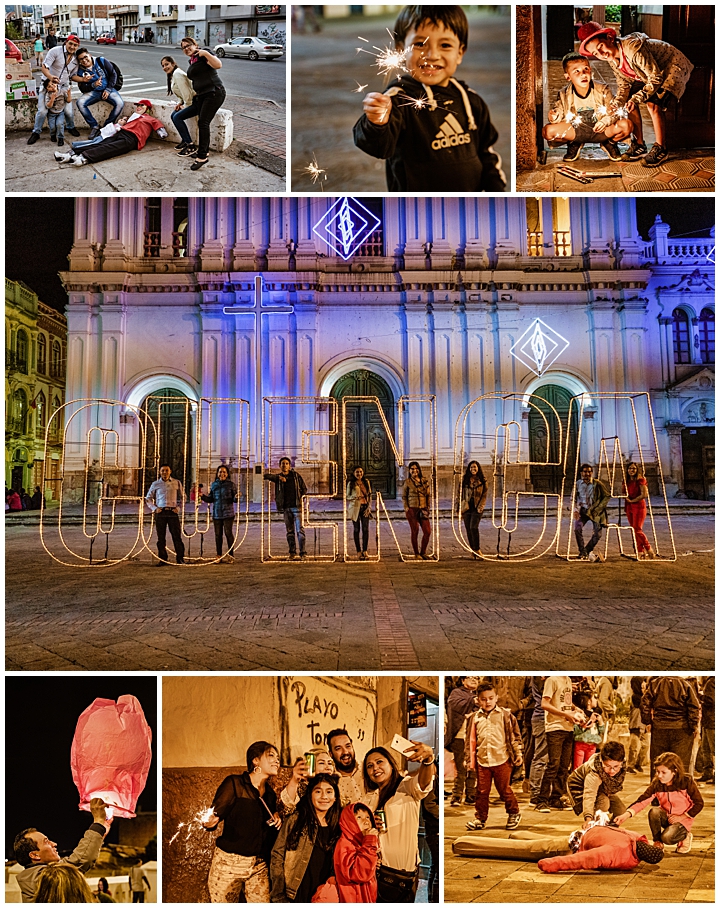 Many families celebrate together, some starting earlier in the day. Notes are pinned to some of the manigotes with names of people the owner had trouble with, negative thoughts, and bad happenings.  You can see notes saying (in Spanish) “smoking,” “job,” “unemployed,” or sometimes the name of an ex-spouse/girlfriend/boyfriend.  At midnight, they are all burned, so the bad of the past can be left behind, and they can start the new year fresh and optimistic. 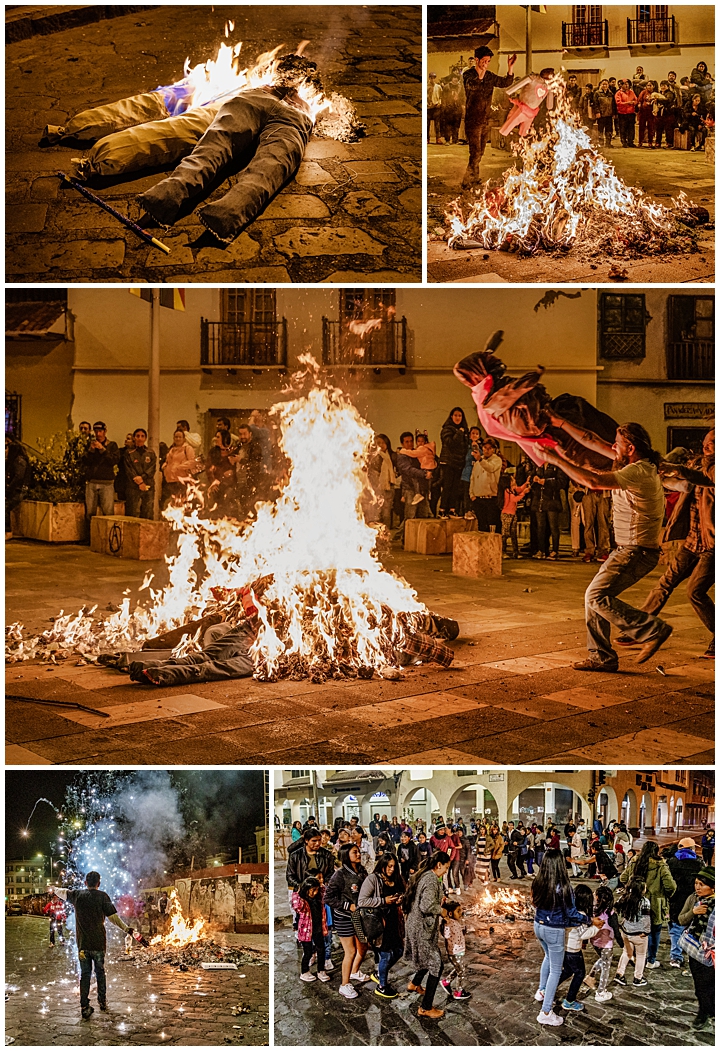 Some of the manigotes (effigies) were stuffed with fire crackers, then doused with gasoline before they were lit. Kids enjoyed playing with their sparklers. This year, there appeared to be fewer fireworks, and fewer monigotes burning on the streets in front of people’s homes and businesses at midnight in el Centro than in prior years.

The main bonfires that were associated with the large displays, appeared higher and larger though, as the personal effigies were added to the main fires at selected intersections.

Then, as tradition dictates, groups got together and danced around the bonfires to welcome in the new year. 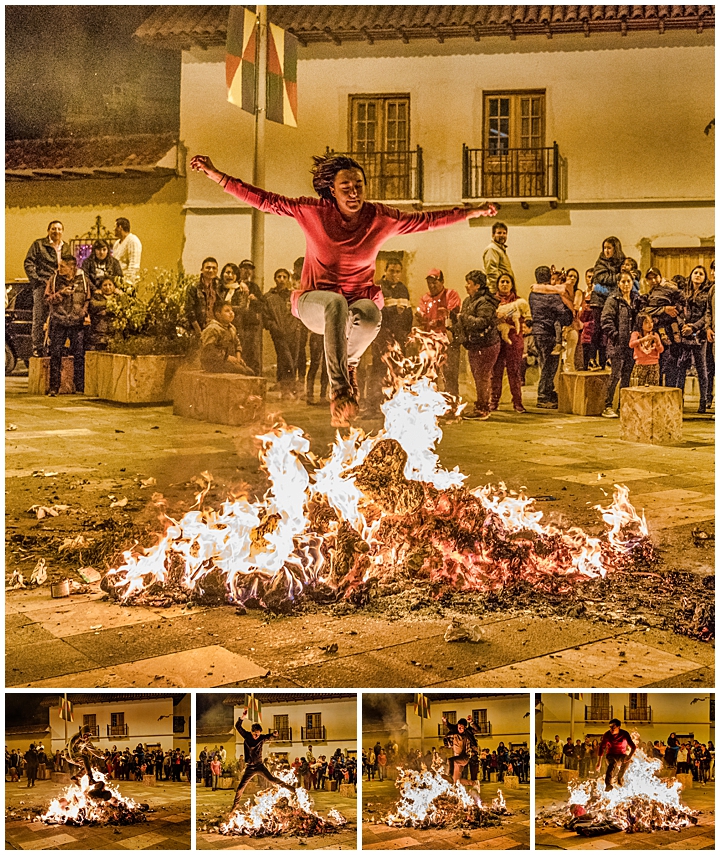 Each person is supposed to jump over the fire three times to bring good luck in the new year. This year, they were jumping over bigger fires than we’ve seen in prior years. In the past, the fires burned down pretty low before many people took the leap. This year, they egged each other on, and the jumping started while the fires were still rather large.  Several cherry bombs exploded while the jumpers leaped above the flames.

Some were jumping over the burning piles of manigotes (effigies) with Pilsner bottle in hand. Others earned style points for tucking and rolling, or for dance poises.  One expat, after many dares, tried to make the jump, but landed right in the middle of the fire. A half dozen locals immediately ran and pulled him out of the hot fire, patting down the burning embers on his clothing. 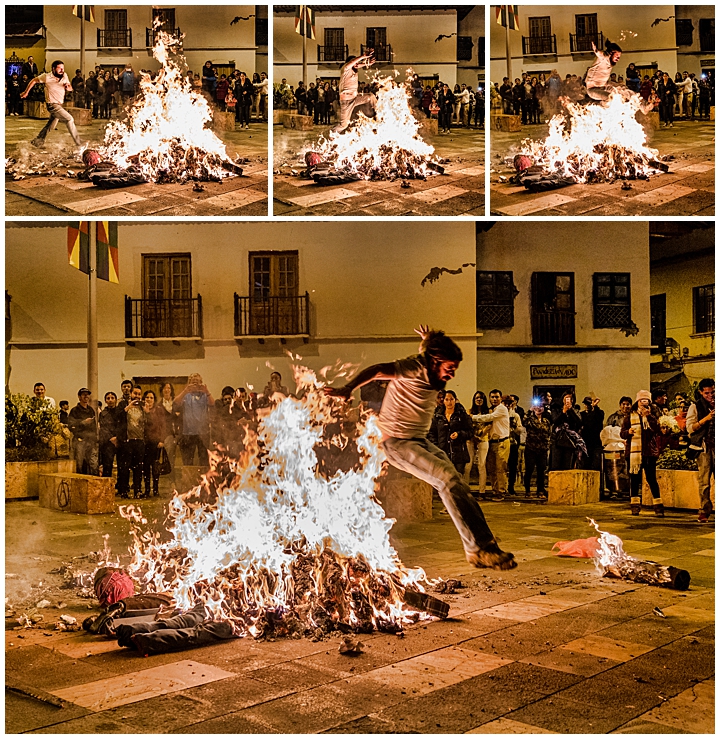 Above shows a sequence as one person ran towards the fire, then jumped through it.

This year, Burt focused on capturing the festivities with his drone. Above is a 45 second clip showing some of the fires. It opens with a random group of people dancing in a circle next to a fire.  The video then switches to a fire at another street corner (seen in video image above), where people keep piling on more material, until it becomes so hot that people can no longer get close. You see the drone backing up too, because the fire was so hot I was afraid that the drone might melt!

Shortly after these clips were shot, I moved quickly to another street corner with yet another fire burning.  I goofed this time though… Because the scene was unfolding quickly, I sent the drone up too soon, before it had grabbed a GPS lock.  I quickly discovered that the visual sensors of the drone do not work at night, as it quickly went wildly off course, crashing into a tool shed and landing upside down in a fenced off construction area at San Francisco Plaza… ☹

I looked around for a policeman to retrieve it for me, but you know the saying “there is never a cop around when you want one.”  Yep, true.  I walked around the perimeter until I found a weak spot where I could unwind a few wire ties and bend back the fence to gain entrance.  The drone was sad, sitting upside down with its landing lights still flashing.  All four props were destroyed (fortunately I have plenty of spare props).  I haven’t flown it since that crash, but all possible indoor tests make it appear that the drone survived the experience… ☺