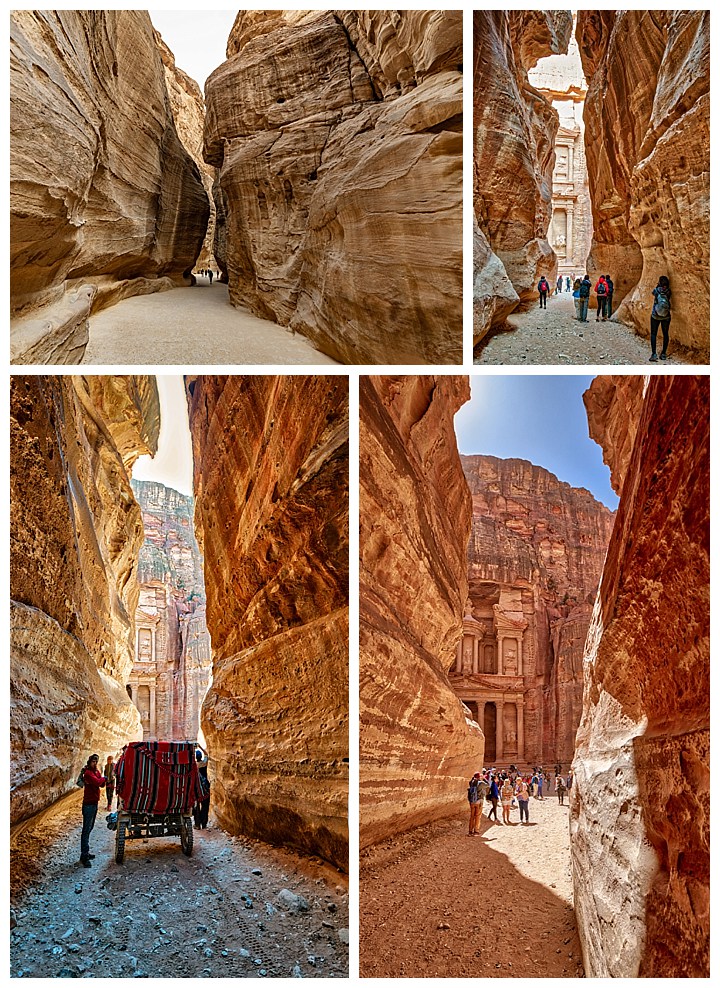 Petra is the crown jewel of ancient ruins in Jordan, and is the primary reason we chose to visit this country. Hidden for more than 2000 years, it is considered one of the seven Wonders of the World with more than 500 tombs and designated a World Heritage site in 1985.

Petra is reached through a long walk of 1.2 kilometers through the Siq, which is Arab for “trench.”  After walking the full length of this path, you reach what is commonly called “The Reveal.” This is the first moment when turning a corner finally shows you Al-Khazneh through the high slot canyon, as seen in the images above. It is a WOW moment.

Al-Khazneh is also known as The Treasury, and is easily the most popular tourist site in Petra. This is due to the combination of being one of the most impressive buildings, and being the first one a person reaches when making the long walk from the outside park gates. Many people have their photo taken in front of the Treasury. Burt is seen (middle-left) taking a photo of a family, at their request.

The actual original intent of Al-Khazneh is not really known, and is actually very small and unimpressive inside (see “bomb” below for more info).  It obtained the nickname of The Treasury because it was thought by the Bedouins to hide treasures, none of which have ever been found. 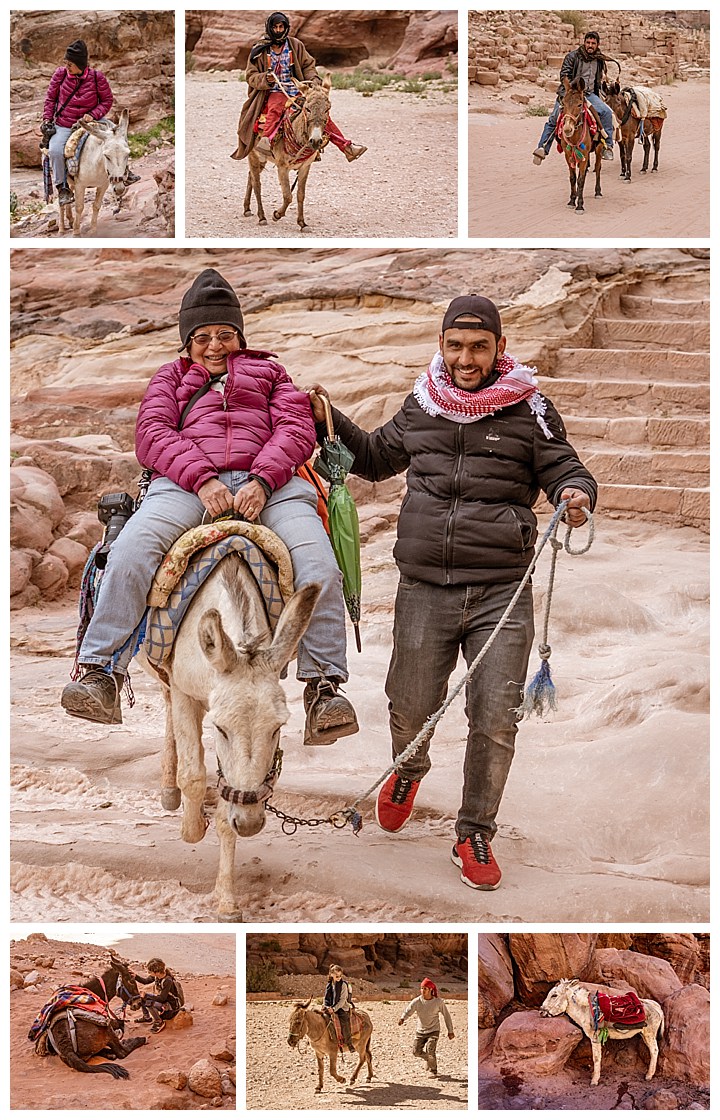 The Monastery is the furthest that most trekkers reach.  It is a long hike of a couple hours to reach the base of stairs, and then a grueling climb of 1100 uneven steps. We opted to hire donkeys to carry us, and Evelyn can be seen above as she navigates one steep downhill portion (yes, you climb, then descend, then climb still higher on this arduous route).

You may also note that Evelyn is wearing a winter jacket. This is normally the start of summer, and is typically hot.  We were blessed with unseasonably cold weather, with the locals exclaiming they had never seen it so cold in April.  To us, that made the climbs (both on foot and on donkey) a far more pleasant esperience. 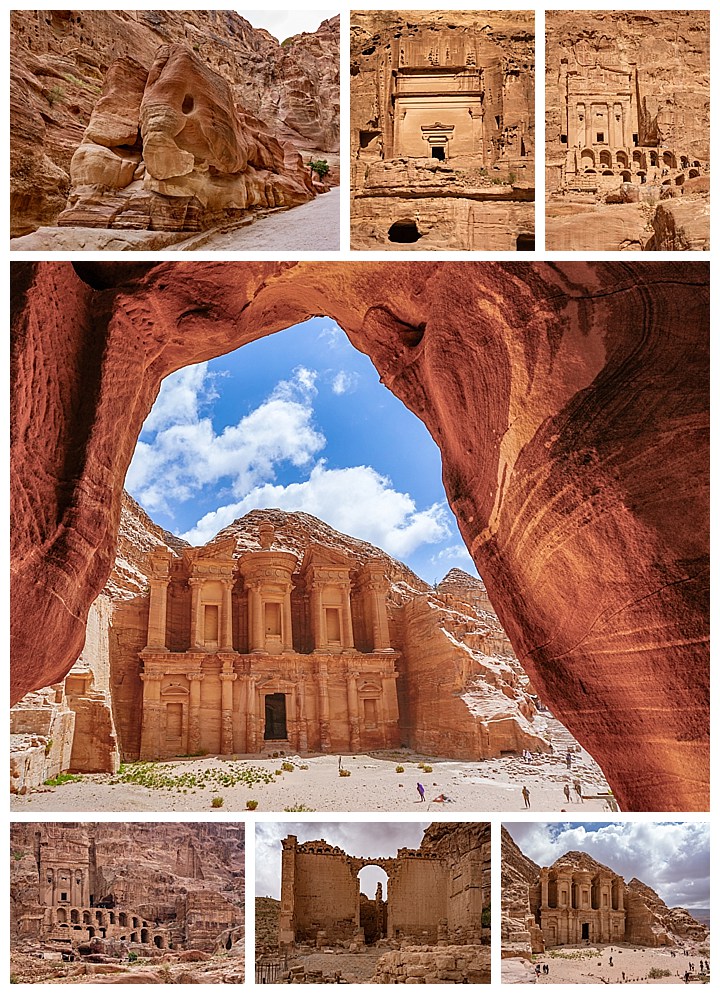 Our donkey ride to the Monastery brought us past many rocks with peculiar shapes that were easy to imagine being animals. The image top-left looks like a fish as you pass it, only to turn into an elephant when you are past it (shown above).  As you keep going, at about the halfway mark, you come across the Royal Tombs (upper-center and upper-right), a massive set of tombs for the royal family over the centuries, high off the valley floor.

Finally, after what seems like days of arduous travel (but is actually about 3 hours where the donkey is doing the hardest work), we open up to the Monastery (center and lower row).  This is the farthest that most visitors go, though Petra actually continues for many more miles.

Camels were everywhere to rent for very short rides, walking around the grounds in front of the Treasury.  Most people who got off exclaimed at how wonderful it was, having never ridden a camel before.  (Because we rode camels for 5 days across the desert of India in 1995, we are far less enthused about the chance to climb on one again…) 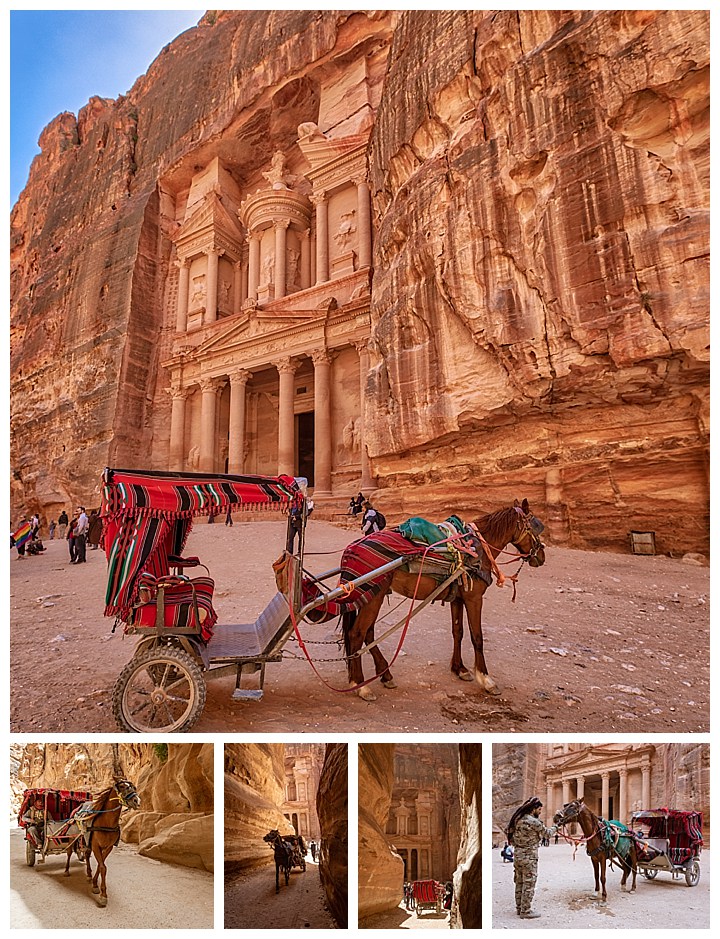 Horses were also abundant, mostly pulling carriages.  In fact, we chose to use such transportation on our third and last trek through the Siq, to see the “Petra by Night” show (below). 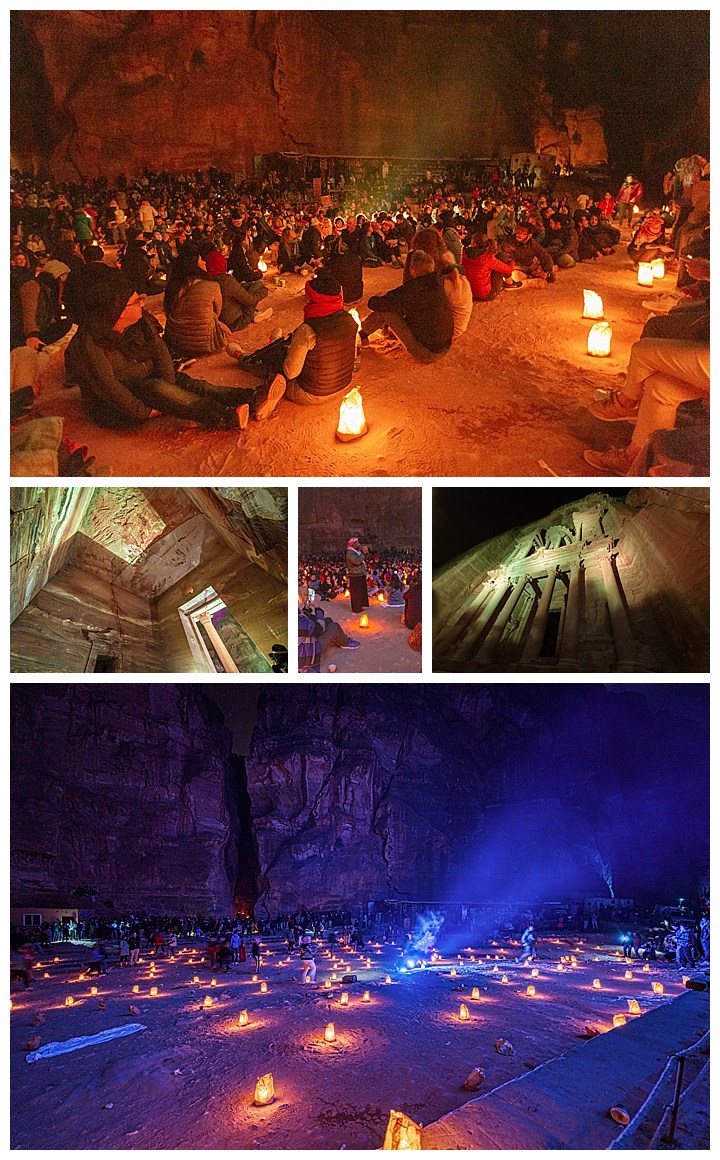 Unfortunately, we found the Petra by Night show to be a rather large disappointment. It is supposed to show the region illuminated by candlelight.  However, they had sold so many tickets, and placed a person by every candle, so that no candles could even be seen (upper).  One man then rose to sing a Bedouin song (center), but it was so dark that it was nearly half an hour before we realized there was a live singer, rather than the music being just a recording.

was the shout that went out.

People panicked, probably with thoughts of last week’s Sri Lanka terrorism attacks.  Some went up the canyon towards the Monastery. Others jumped onto the platform and went inside the Treasury.

I first thought it was part of the show, but later decided it was just a false alarm (what terrorism attack would have a single bang far from the crowd, and nothing further, including no police shouting??).  Therefore, I extended my tripod, and started to get the photos that I had initially envisioned, with a sea of candles lighting the Treasury (bottom).  Evelyn thought I was nuts… but that was not exactly the first time she thought that… ☺

I realized that the police were too busy trying to calm the crowd and get them back to their seats. They would never have time to stop me from entering the Treasury (off limits to tourists).  I therefore sauntered inside the crypt and was surprised at how small and plain it was (center-left).  After about 10 minutes, the police arrived to clear out the Treasury, including my camera and tripod.

Just as Social Media spreads false rumors instantly, so did several explanations of what had been heard. First, I was told by a breathless woman “a drunk policeman fired his gun into the air!”  About a minute later, another exclaimed with authority “I heard it was a drunk Bedouin that got into a fight with a policeman!”  Our tour group organizer said she was told that another tour group (not hers!) had tried to set off fireworks and it had not worked, just blowing up instead.

We walked out of the canyon with two park rangers. We were last out of the canyon because I was taking advantage of the panic to get photographs, and the guards were fairly cooperative about it.  They said that the recent rains had simply loosened a rock, which had fallen into the canyon off the cliff above. They said this happens all the time, but that usually not at such a poor time, nor does it usually cause such panic.

Personally, I think I believe the park rangers.  Partly because “they should know” and partly because it has the least drama, and “the simplest solution is usually the correct one” is an axiom I have long subscribed to…