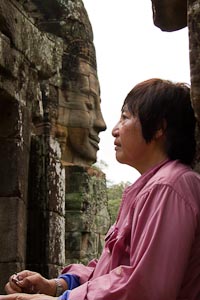 I thought when I started this trip, that I would be sending one of these updates daily… maybe every other day at most.  Not a chance!  Getting up at 5AM for sunrise photography, getting back just in time to shower before a show, coming back to unload the photos from our cameras and then trying to keyword and rate them (We had 3102 photos in the first 4 days).  We are falling behind on doing that before collapsing to sleep, let alone being able to write much.  I keep forgetting that I married a wife who believes no vacation is good enough unless I need a vacation to recuperate when I get back! 🙂

The floods continued until this morning (Thursday), but are now starting to subside.  We have lost two cars to the flood so far.  The first developed a really serious whining sound, and was taken to the shop before it stranded us. 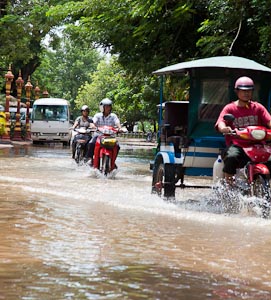 The second car (Wed) actually did strand us as it stopped in the middle of the street twice.  The third time it totally died — at least it had the decency to do so at a restaurant, so we had lunch while they retrieved a third car.  Turned out both the first two got water where water ain’t supposed to be, and needed repairs to get them road worthy again.

Up until 2 or 3 years ago, there were literally no “rules of the road” here.  Most drivers are still not licensed, and the driving reflects that.  The only rules of the road currently appears to be 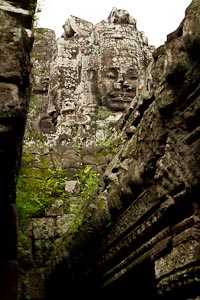 Food here is amazing, and amazingly cheap.  We had a very nice dinner for 3 people last night, and including drinks it came to less than $10!  The beef and chicken are both on the tough side in many places, but the fish is always excellent, and today we had beef skewers that were some of the best I have ever had — and they cost $2 for more than we could possibly eat.

We have seen more temples than I ever imagined possible.  Angkor Wat is the grand-daddy of them all, but was rather disappointing from a photography point of view. Ta Prohm was the most interesting photographically, with giant trees having taken over, their roots interwoven with the stones of the temple. 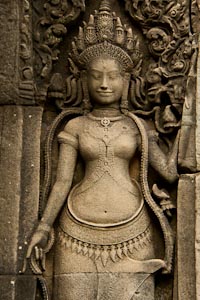 We have had a massage here the last three nights at the hotel.  A full hour costs $8, and the masseuse was quite good.  They want to give a full body massage though, and I had the hardest time getting them to understand I just wanted a back massage (my back was in agony after lugging too much camera equipment for too long a distance over too many hours yesterday).  Once I got it understood though, I walked away downright limp and with a back that was fit for another day.

Yesterday we did some walking around town and went to a restaurant not far from the hotel.  While there, it started to rain.  No, that doesn’t convey it.  The sky opened and god dumped a very large bucket on us.  The amount of water was astounding!  We had gone to a part of town that was not flooded, but within the 30 minute gully washer, the streets were under 18″ of water.  With the drains already overloaded from the flood just a few blocks away, there was nowhere for this water to go… so it stayed… 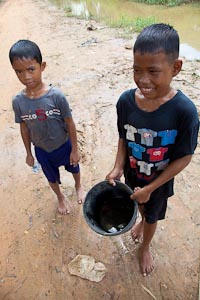 When we arranged this trip, we communicated both with the owner — Dave, a sometimes professional photographer — and with his chief marketing sidekick — Warren.  Dave has been taking us around on the tours, and is a bit of an odd duck,  An Englishman by birth, he moved to Cambodia in 2003 and decided to stay.  If you want to learn the techniques of photography and composition, he is a good instructor.  As it happens, we are advanced enough in those areas that his occasional reminders are useful, but not key. Rather, we are relying on his knowing where to go for the best photographs.  Unfortunately, the record floods that have occurred over the past 3 weeks have meant that many of the best places are not accessible.  He has been extremely accommodating though and responded to every request we have made almost before we made them. 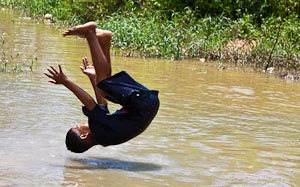 We met Warren last night when he picked us up and took us out to dinner.  He is a character with a life story to make any vagabond jealous.  He started as a civil engineer in England, moved to America for a few years, returned to England, and decided he was bored and wanted to see the world.  He bought a one year round-the-world airline ticket, sold all his belongings and went traveling.  He has lots of stories from those travels.  He then wanted to “give something back” and volunteered with a well-digging project for delivering fresh water to outlying villages in Cambodia.  He fell in love with the country, fell into tour guiding as he became an expert, and decided to live in Cambodia for a variety of reasons (not the least of which is he now has a Cambodian girlfriend). 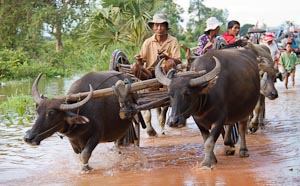 Yesterday we visited a “floating fish market” that moves around from time to time.  Since the region was completely flooded, the major boat tours that were usually at a boat dock were now anchored on the side of the street. An occasional tour bus would show up, and carts pulled by water buffalo took the tourists from the bus to the temporary dock in the middle of the street.  Meanwhile, the fish mongers just dumped their fish on planks and let them flop around while customers negotiated prices and took home dinner.  The fish were certainly fresh, and likely caught on the side of the road — aka the river… 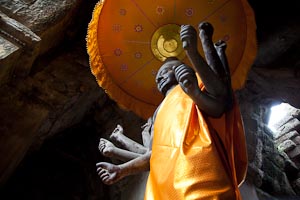 Today we went to the Phnom Kulen waterfall with a temple at the top for photography, which is also considered the most holy place in Cambodia.  Unfortunately, the waterfall was at its highest level in decades but was not all that interesting photographically. We also encountered an 8-year old kid enroute to the falls at the banana fruit stand who presented countless poses that any portrait photographer would die for.

The road there was largely destroyed by the rains and floods, and a 2 hour drive took 4 hours to get there. To our surprise there were a couple of 2-wheel drive taxis that also managed to make it up the road to the falls.  They didn’t fare so well coming down…  We left after them an
d found one of them stuck in the mud about halfway down the mountain.  We got there after their insurance truck had arrived (who knew??), who helped them cut down small trees to make a wooden ramp they could get out over.  We then traveled further, only to find the second taxi had gotten stuck even deeper, with no insurance truck in sight.  Our car had a winch, so we helped winch them out of the hole they were deeply entrenched in.

About that time a scooter came up the road and got stuck too.  Now, let me tell you about scooters in Cambodia. They are everywhere and the primary means of transportation.  They are mostly small Honda or Suzuki bikes with maybe 125 or 175cc max.  And they carry the whole family. Three on a bike are “legal”, and we have seen several times where a complete family of 5 was crowded on a single scooter.  Dad in front, mother in back, two kids in between mom and dad, and a third tyke in the basket in front of dad. 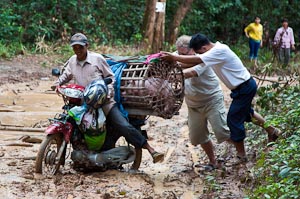 Oh yeah, our scooter in the mud.  Well, a family of five did come down, but they got through OK.  The mom and kids got off.  Dad powered the bike through the mud, the family reloaded, and off they went.  But… coming up the hill was a bike with a load of pigletss.  Yep, pigs.  Across the seat behind the single male driver was a basket slung that was at least 8 feet across, stuffed with piglets.  Looked like maybe 20 or 30 piglets stuffed in there.  The guy became totally stuck in the mud, and almost did a turtle flop on his back.  He was saved by tourists watching the stuck taxi, who got together and pushed him forward, letting the piglets move to their new home to grow into proper pork and bacon… 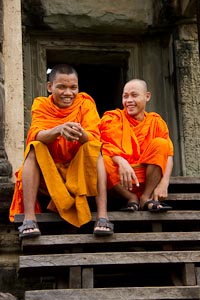 Any photos you may see of me from this trip are to be properly burned in a funeral pyre.  Evelyn has been after me to grow a mustache for the past couple months, and I said I would see how it went on vacation, where nobody I know would see me… except in photos…  I think a mustache will look bad, so I decided to go for a full beard again (I shaved the last one off about 25 years ago), which means I look really, really,… yes really scruffy right now, after 5 days of not shaving.

We went to a classical Cambodian Dance show tonight. The Aspara dance consists of elaborately costumed dancers and music played by a pinpoint ensemble paying homage to royalty with deities and spirits.  It was a huge hall, but our guides arranged a front row table for us.  Dinner was a buffet, and I was pleasantly surprised to discover the food was actually quite good — not something I normally expect at buffet dinners.  The speakers were terrible though, and you could not even tell when someone was talking much of the time.  Of course they were talking (and singing) in Cambodian, of which I don’t speak a single word, so I guess that didn’t really matter all that much…

Need to pack it in and send this off, as we still have to get everything together tonight to leave for Phnom Penh at the crack of dawn tomorrow.  En route we are scheduled for a boat cruise and to see a floating village on Tonle Sap Lake. 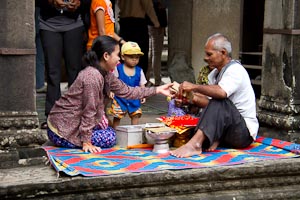 I want to leave tonight with one last thought.  The Cambodian people are remarkably resourceful. They have been inundated with floods for the past several weeks.  Conditions that would cause most Americans to scream and call for the Feds to save them.  Here, the people just get on with life. When watching the people drive their scooters with 2, 3, 5 people on them through the floods, it is common to see them laughing and making the most of their situations. The people here are unfailingly polite and helpful.  If it weren’t for the humidity, we would seriously consider retiring here. Oh yeah, that and the language which is highly tonal and which a tone deaf guy like me would have little chance of mastering…