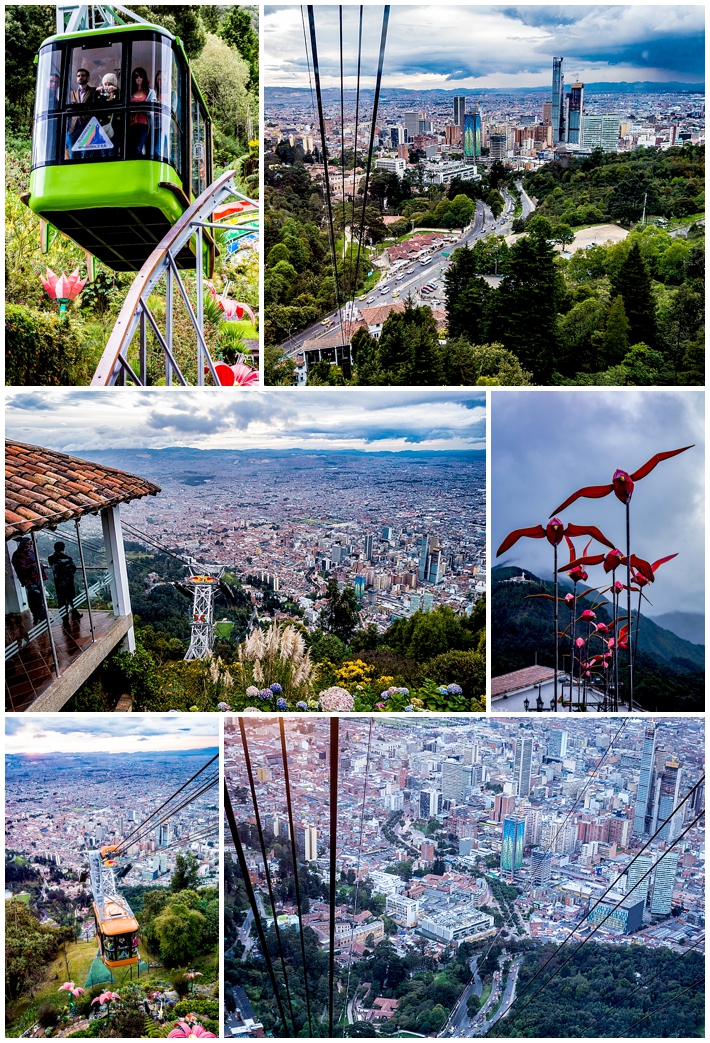 We left Bogotá this morning, enroute to Medellin.  Yesterday, I posted about the street art of the city.  Today, I will talk about the rest of our trip. Much of the time here has had overcast skies with occasional drizzle — never enough to pull out the umbrella, but enough to keep it cold.  Late on the first afternoon, the sky cleared enough that we took the cable car to the top of the local mountain.  It gives a breath-taking view of the city — all the more so, since the top of the cable is at 10,428 ft elevation.

On the third night, the man at the front desk of our hotel asked me what I thought of Bogotá.  I told him that I was glad we came to visit, but that I would not want to live here.  The city is cold — much more so than Cuenca. The streets are lined with trash constantly (he said the city is not very organized in its trash collection).  There are many homeless sleeping on the streets (and in this cold, I am surprised they can survive). Crime is high throughout the city (we are constantly warned not to walk out at night).  There is dog shit on almost every sidewalk (I never once saw a dog owner scoop after their dog).

On the other hand, the food here is delicious and amazingly cheap.  Our first meal was at a Japanese restaurant. We had sushi, plus calamari, plus an appetizer and two drinks. When we left, I looked at the receipt, thinking they had forgotten to charge us for something.  Nope. It was all there.  The entire meal had set us back $9 for the two of us.  It takes some getting used to, dividing all prices by 3200 (the exchange rate), and realizing that 10,000 Colombian Pesos is just a tad over $3!  The ATM here won’t give out more than 300,000 pesos at a time, which is only $100, but that goes quite a ways in this town. 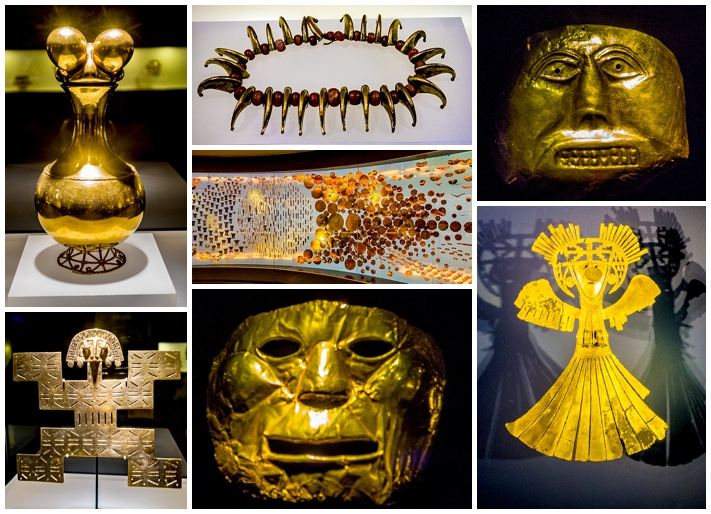 Bogotá is a city of 65 museums, so there is something for everyone that likes museums. One of the most famous is the Gold Museum, which houses the largest collection of pre-Hispanic gold art in the world, which we visited on our first day. The Colombian government was originally rounding up all gold artifacts and melting them for gold to put in their treasury.  In 1939, the head of the state bank decided to save some of the best pieces to be put on display.  The item in the top left above was the first piece he saved.  It has the interesting property that looking at the urn (used for lime, to neutralize cocoa when chewing the leaves), it appears to be a normal golden container.  When a digital camera is moved in front of it, a face suddenly appears — which cannot be seen without a camera.  Given that this was created more than a thousand years before cameras makes you wonder… 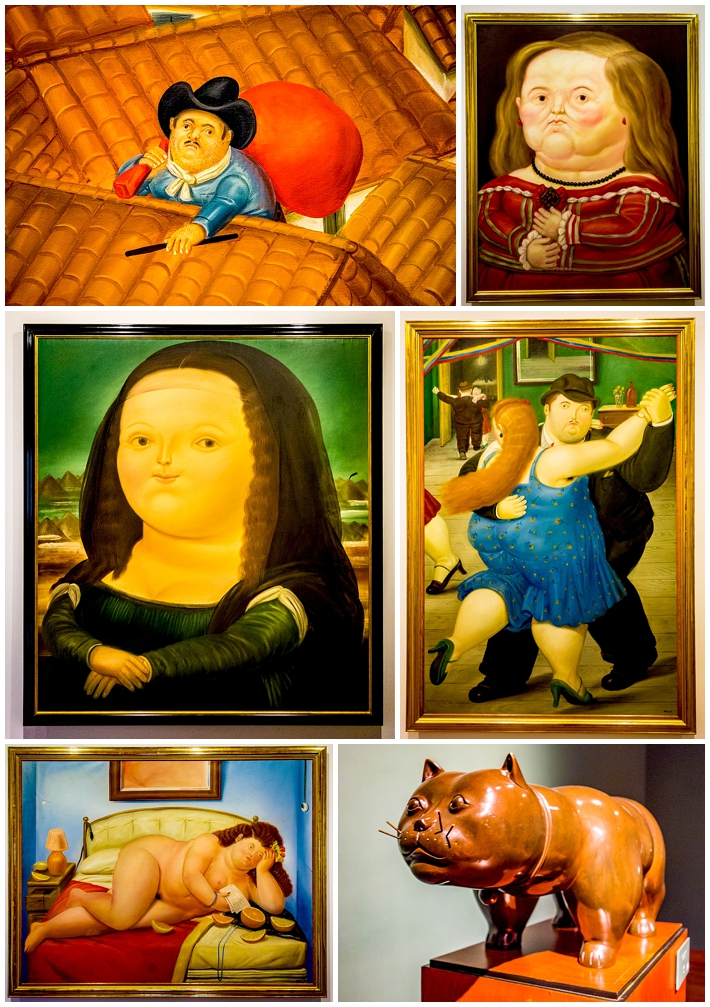 Another of the famous museums in Bogotá is the Botero Museum — dedicated to all things fat. In 2000, Fernando Botero donated 123 of his paintings and sculptures to the city for a new museum, plus 85 pieces of art from other internationally known artists, such as Picasso, Dali and many others.  If you are an art lover, this is a museum not to be missed. 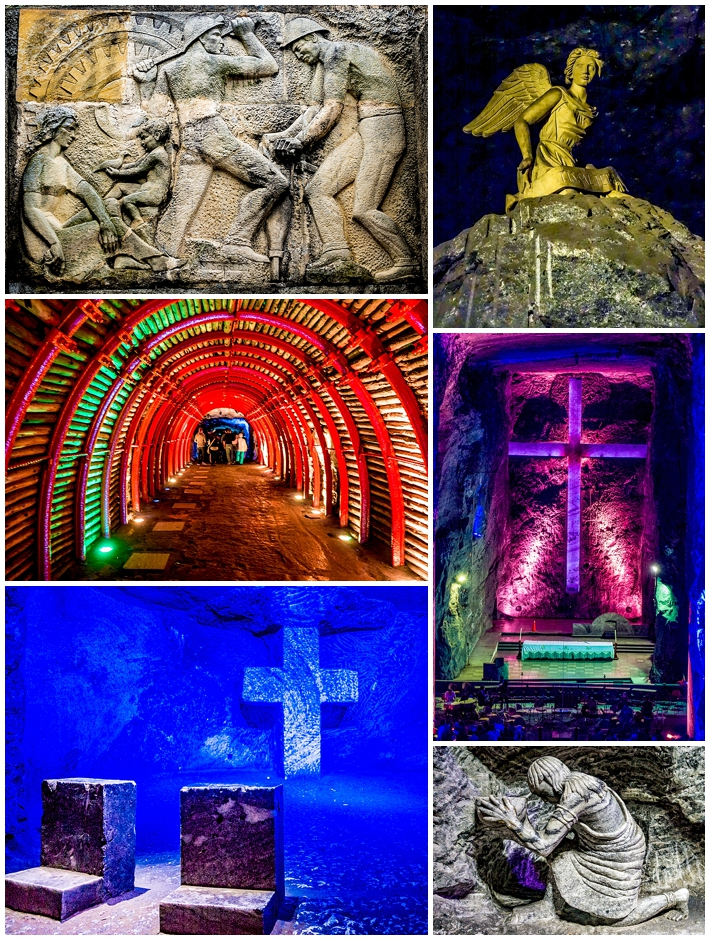 Outside of town is the Salt Cathedral of Zipaquirá, a salt mine that has been operated since the 5th Century, and is still in full production today.  We hired an English speaking guide, or you can join a free Spanish speaking tour group. Part of the tour is a 3D movie giving the history of the mine, including the ways the salt has been retrieved over the centuries.  There are 5 levels of the mine, excavated with traditional explosives, picks and rail cars.  The salt is now mined by pumping high pressure water though, bringing the salt to the surface with no need for underground miners.

The tourist part of the mine is the cathedral and stations of the cross.  Originally created in 1932, that cathedral was closed in 1990 due to structural concerns.  A new cathedral was started in 1991, and opened officially in 1995, which is the one you are now allowed to visit. 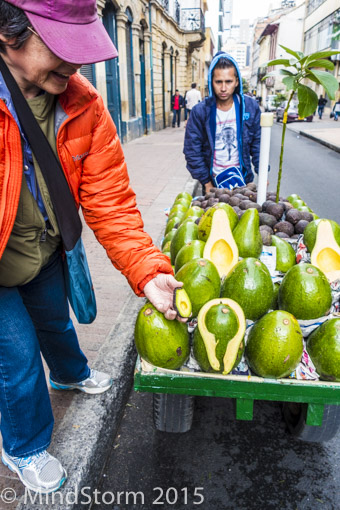 I mentioned earlier that the food was amazingly cheap in Colombia (when paying with US Dollars converted to Colombian Pesos at 3200 pesos / dollar).  I didn’t mention how absolutely ginormous the fruits and vegetables were though.  Above is a photo of a vendor selling avocados from his wheelbarrow.  We had to get a shot.  Those avocados are more than a foot long and maybe 7 inches wide!  Here Evelyn is holding a “normal avocado” as we would find in Ecuador or the States, next to one of these giant avocados the vendor is selling.  If we had a kitchen here, I would have bought one to try — at less than $2 each.  (For comparison, I buy the small ones like Evelyn is holding for 50 cents each in Cuenca.)