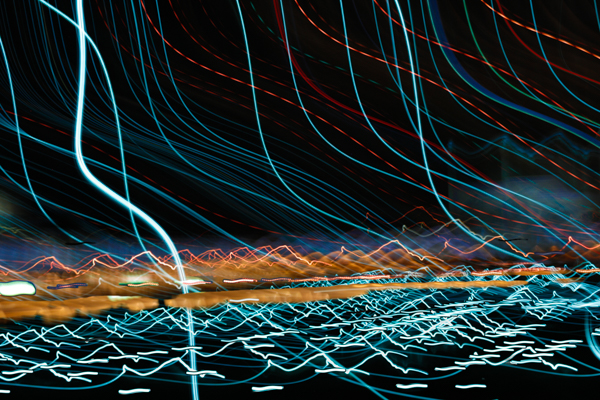 Happy mistake when the camera was moved while shutter still open.

Iranian Local: (after opening pleasantries and surprised that I am an American.) My English is good because I studied hard, expecting to go overseas to study.

IL: No. We discovered we could not afford it after the collapse of the Rial (the local currency).

So what is the real story of the impact of the continued American sanctions?  I cannot speak for any government plans to create a nuclear bomb, as I have no direct knowledge.

On the other hand, the local people have been hurt in ways that no American can begin to comprehend. Their life savings have completely disappeared. As a direct result of the American sanctions, the Iranian currency has collapsed. In 1979, the Iranian Rial was on par with the US Dollar. That is, 1 IRR = 1 USD.  Today, 1 US Dollar equals 135,000 Iranian Rial. So, if that happened in America, and you had $1 Million in 1979, you would have $7.40 today.  Think about that a moment…

Some of that can be blamed on the religious revolution of 1979.  However, the Rial collapsed another 66% in May 2018, within one month of Trump’s withdrawing from the Iranian treaty and his desire to start a war.  In the US in the 1980’s inflation reached 13.5% and American savings were being wiped out. Imagine if that inflation were 300% instead, and created by a single external country intentionally?

Despite that, we never once met an Iranian who blamed Americans for their problems. They did blame the American government — along with their own. They never held any animosity towards us as American people though, and in fact, welcomed us openly.  They also appear to be almost universally smiling and happy as they walk around town or play tourist in their own country at the same monuments we visited. We felt safe the entire time we have been here. 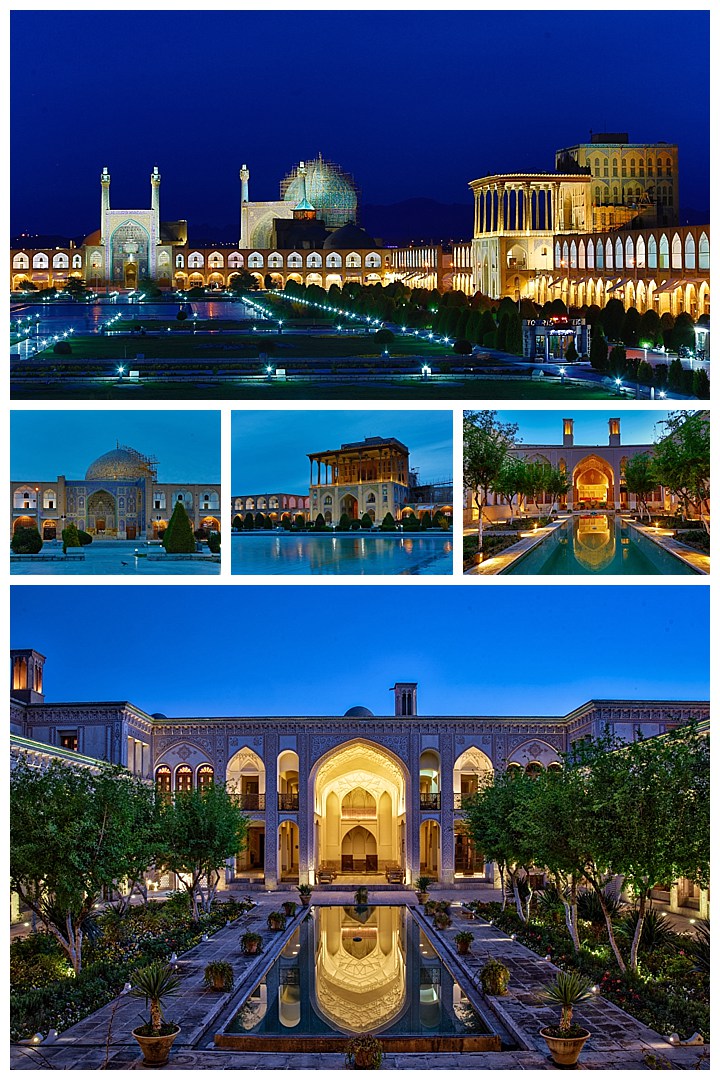 We went again to the Naqshe Cehan Square for the morning blue hour (in other words, another day rising well before dawn!

The photograph at the bottom is actually from the hotel we stayed at in Kashan — a centuries old home of a wealthy family converted into hotel.  It had twists and turns, and half a dozen fountains like this one shown.  Stairs were steep and frequent, and this was clearly not a place for an elderly or mobility-impaired person to stay. 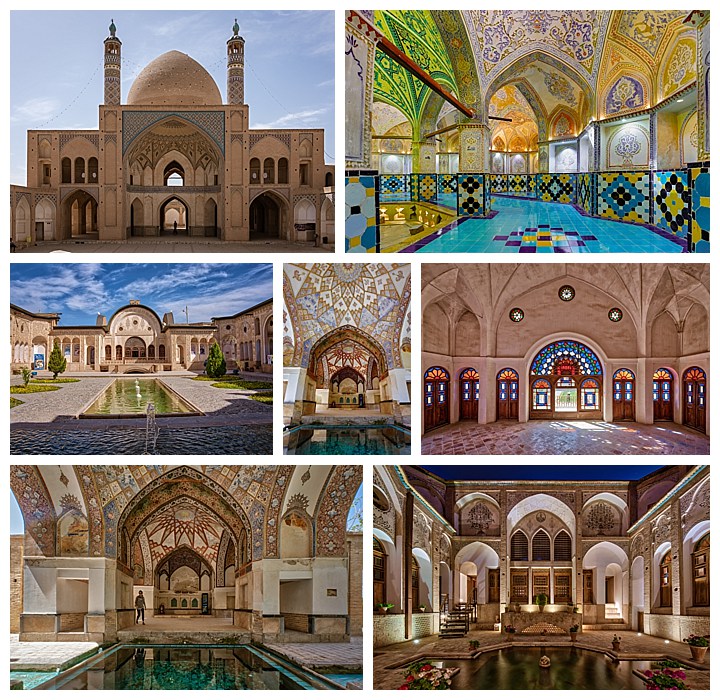 We also visited another bath house, mosque and garden, continuing to collect images of unique and beautiful architecture. 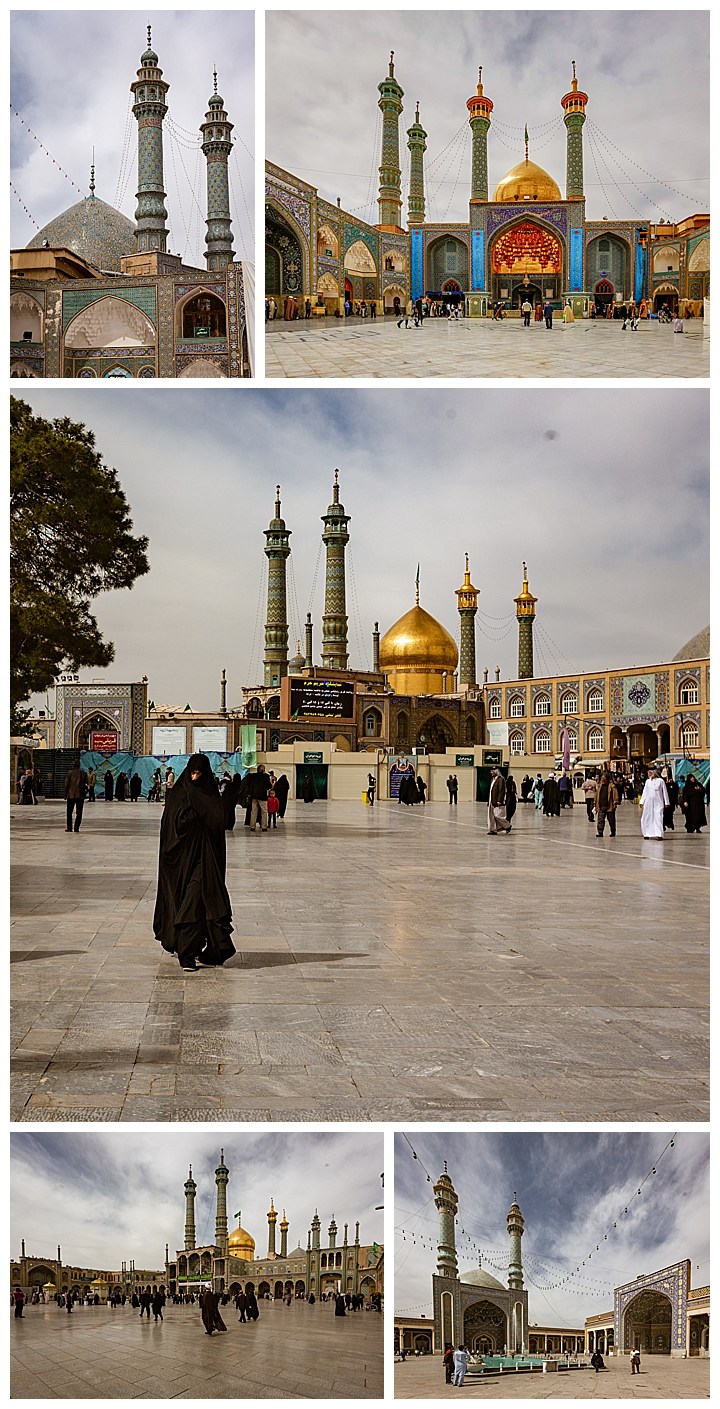 In the afternoon, we drove to Qom to photograph the holy shrine dedicated to Lady Masoumeh Fatima. This is considered one of the most holy shrines in Iran.  Photography is normally not allowed in this shrine at all, after the this site was bombed recently.  However, our guides negotiated to allow us to use our cell phone cameras (though not SLRs).  This was considered a major concession, since even the local Iranians are not allowed to take photographs of any type.

Iranian Mullah (upper-left): You are the best ambassadors to Iran. We hope you will take photographs, tell stories, and explain to the world that we are peaceful and not like what the Western newspapers say.

And that pretty much sums up the attitude we found everywhere we went in Iran.