Our 5-day tour of the Galapagos Islands continue (read part 1 here). There are both Blue-Footed and Red-Footed Boobies on the islands, though we only visited islands with the Blue-Footed variety.  From prior trips, we found them the more interesting anyway, and this time we visited shortly after the chicks had hatched (right-middle and left-bottom).

Again, many of the photos on this post were contributed by Mark and Kerry Jones, our nephew and niece who accompanied us on this trip. 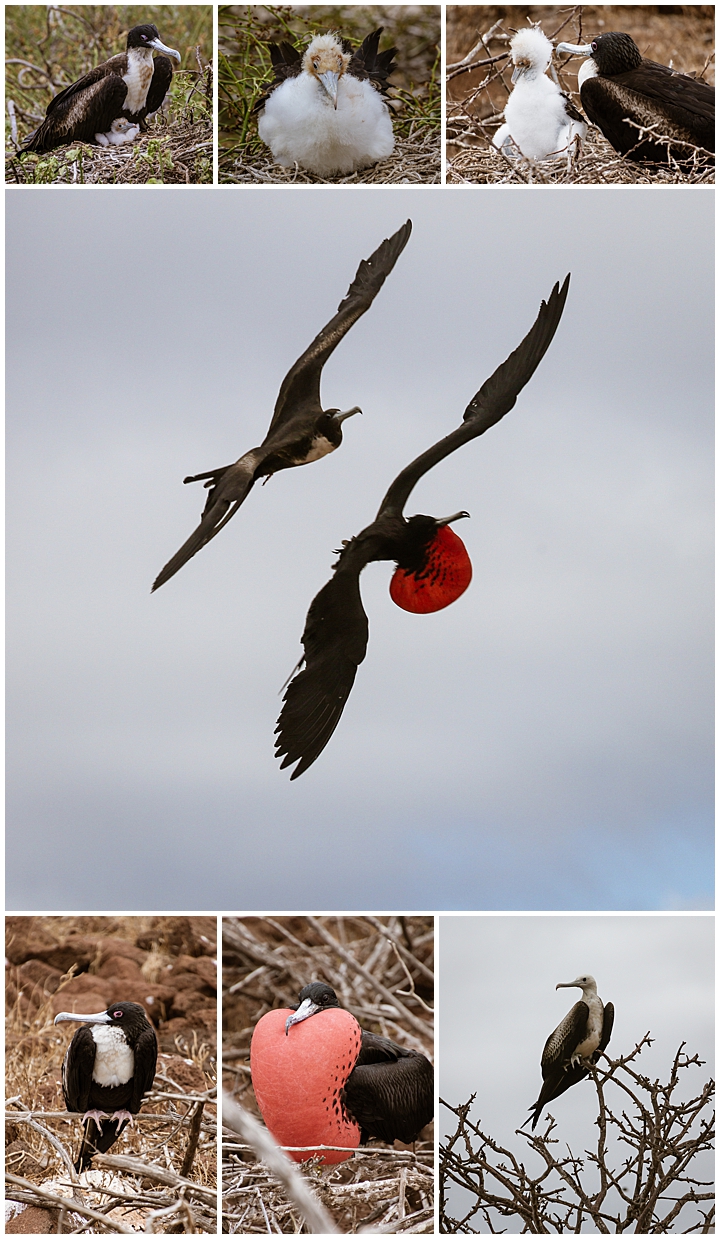 Frigates were also in full mating form with their red throat pouches fully inflated (center and lower-middle).  Since the frigate mating cycle does cover several months, there were also some female frigates still sitting on their newly hatched chicks (upper-left), and other chicks recently freed from the nests (upper-center and upper-right). 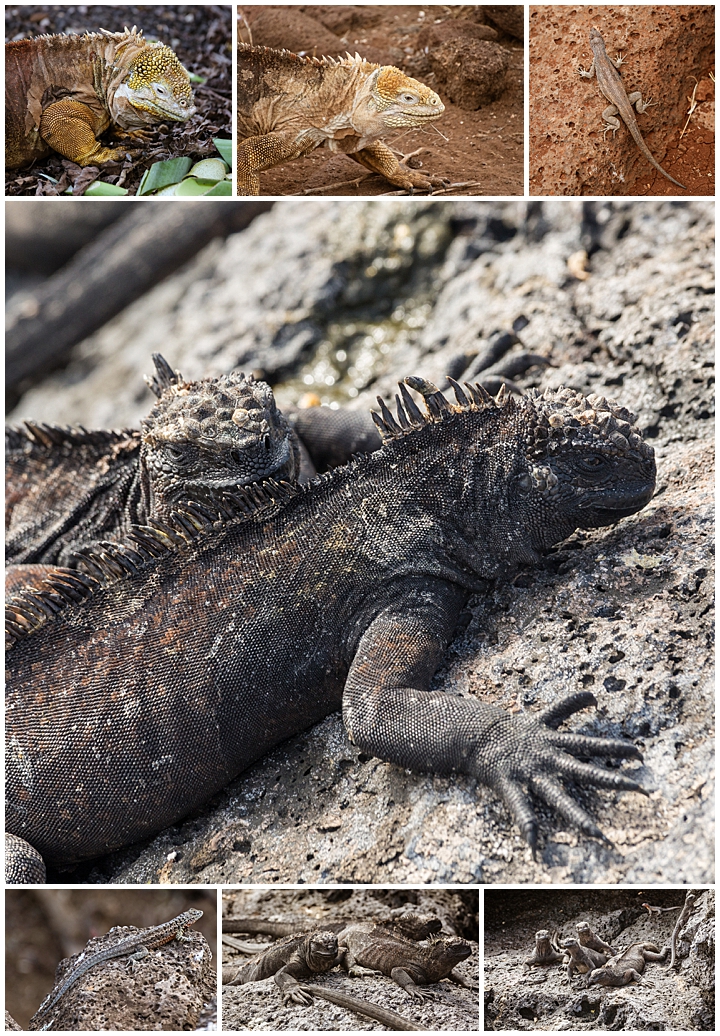 There were a few types of lizards on the islands (upper-right and lower-left), but the dominant ones were the land iguanas (upper-left and upper-center) and the marine iguanas (center, lower-center and lower-right).

The marine iguanas have the interesting habit of frequently sneezing, with a white substance coming out their noses.  That is actually salt that the iguana is expelling after eating underwater sea plants. 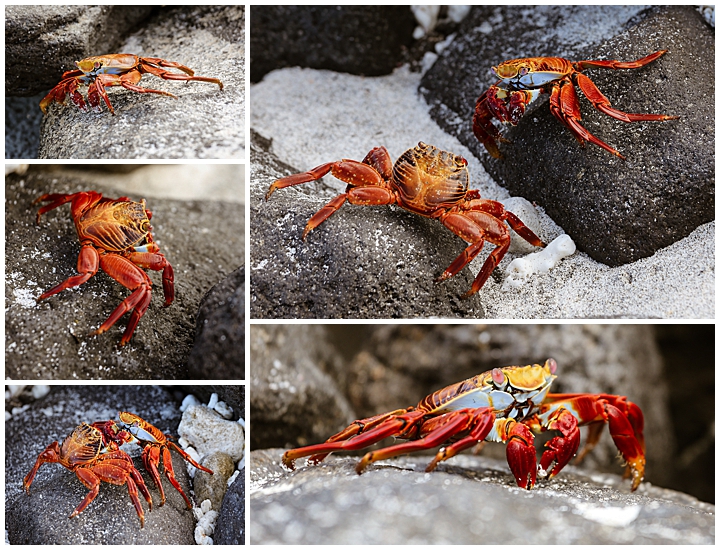 Sally lightfoot crabs have always been a favorite of ours to see and photograph. This time we were able to get video of them too, as they scurried over the rocks.  These are bright red and yellow tiny crabs, anywhere from the size of an American quarter to the diameter of a tennis ball at their largest.  In nature, bright red and bright yellow generally indicates that the individual is poisonous (the poison creating the animal’s color), which keeps predators away.  In the case of the Sally Lightfoot crab, they have mimicked that color, so that they are mostly immune to predators, though they actually carry no poison.

Our boat was a luxury yacht (Grand Queen Beatriz — upper-right) built in 2018 and holding a maximum of 16 passengers and 12 crew. We moved between the anchored boat and land using two Zodiaks (center-left and lower-right).  When on the island walks, Roberto would give nature talks about the biology of the island.

As a lifetime biology teacher turned island guide, he was full of information and always had an upbeat, comical way of presenting the information — which assured that everyone huddled close to hear his latest story.  On one island, some carcasses of animals that had died naturally were laid out for our inspection and education. 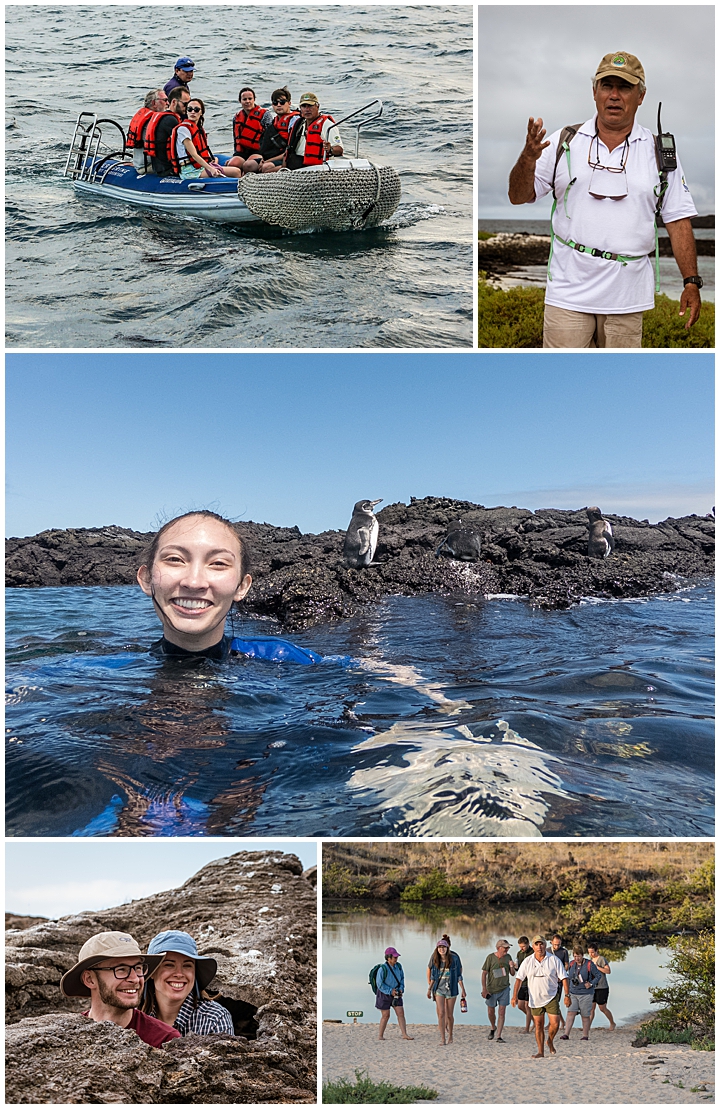 There were a total of 11 guests on this boat trip, so we were not at full capacity. We were lucky in that everyone was compatible and enjoyable, and all combinations of table seatings produced great conversations. Most of the group can be seen following Roberto from a small lake (lower-right), and half out group on a Zodiak as they prepared to land (upper-left).

We went snorkeling several times, and at one location Kerry had her portrait taken with Galapagos penguins in the background (center). 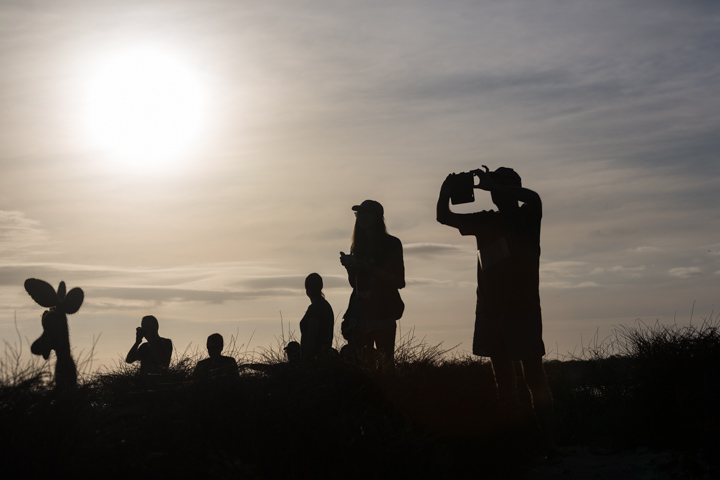 On our last night on the islands, several of us stood on a hillside at sunrise watching the blue-footed boobies diving for their dinner.  (Kerry is second from the right).

Kerry (our niece who was here celebrating her 23rd birthday and university graduation) bought a new GoPro Black7 for this trip, and took it snorkeling. While in the water, a penguin started to peck on the mask of Mark (her bother).  Watch the video above to see the encounter that followed.  (Note: this video seems to show in higher resolution if you follow the link and watch it on YouTube directly).

Many thanks to both Mark and Kerry for contributing images and videos for this blog, and coming down and spending the week with us.